Add another one to the win column for Medicaid Compliant Annuities.

Occasionally in the area of long-term care Medicaid, the states like to overreach.

There are countless examples on this topic.

Bottom line, states agree to run Medicaid in a way that is no more restrictive than the federal laws governing Medicaid. And, still they try to go beyond their federal mandate to add little restrictions that they hope everyone will follow. The average Medicaid applicant does not have the time, the patience, or the resources to force the state to line up properly with federal laws.

The federal law, especially after implementation of the DRA,  is very specific about what kind of annuity counts as an income or an asset and when they create a penalty. The federal law puts no restriction on when a Medicaid Compliant Annuity can be purchased. Quite often Medicaid Compliant Annuities are purchased in crisis planning cases to convert excess assets into an income stream for the community spouse. This helps the community spouse to keep from going broke and to provide resources for the community spouse’s own care and well being later on down the road.

In Ohio, the state Medicaid department tried to put an end to the use of Medicaid Compliant Annuities in asset conversion cases.  The state added a small requirement: if the annuity was purchased after someone had gone into the nursing home, it was treated as a transfer for less than fair market value and disallowed.

Any reasonable person that has worked in the Medicaid Planning field knows that there is no rule restricting when a penalty-free transfer can take place.  The thought is preposterous!  But that didn’t stop Ohio from trying to use that rule to deny people their rights created under federal law to properly transfer assets into the Medicaid Compliant Annuity.

Fighting these things can be difficult.  Even when you have the law and the facts on 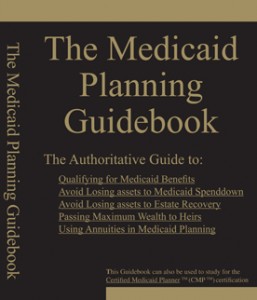 your side, the judicial process can go haywire on you.  That’s what originally happened in Ohio.  What should have been an easy slam dunk for the federal district court in favor the Medicaid applicant became a nightmare for Medicaid Planners in the region.

The district court actually upheld the state’s practice of disallowing the Medicaid Compliant Annuities.  When that happens, the effect only applies to the geographic region that the district court covers. In this case, it was essentially the northern half of Ohio.  While we were still having great success using annuities in southern Ohio, planners in north mostly stopped and waited to see where this case went.

For those that didn’t take civil procedure, a federal district court’s opinion is appealed first to the circuit court.  A circuit covers a number of states and when a circuit court rules on something it is binding in those states.  Taking a case to the circuit court is a large gamble.  If you win, you set precedent for a whole region of the country.  If you lose, you take a bad decision in one part of one state and expand it to all the states in the circuit.  In the Sixth Circuit, that could have spelled trouble for everyone in Michigan, Ohio, Kentucky, and Tennessee – and potentially set a bad precedent for other states.

Fortunately the gamble paid off.  The Sixth Circuit issued a well drafted opinion that struck down the state’s view on Medicaid Compliant Annuities and affirmed the common planning technique used by Medicaid Planners throughout the country.

The effect of this ruling cannot be understated.   It is uncertain if the state will appeal or if the Supreme Court would even hear the appeal.  This case marks one of the highest rulings in favor of Medicaid Compliant Annuity planning.  It gives judicial support to the common asset conversion techniques used by Medicaid Planners.

Asset conversion is essential for the ability to take retirement assets and turn them into something akin to a pension plan for the healthy spouse.  Without the ability to do that, Congress recognized that it would be a huge disincentive for people to save their resources for retirement.  If Congress had wanted to put a limit on when the conversion could take place, they would have done so specifically.  For a state to add on a limit is reprehensible, but they often get away with this because not enough people stand up and challenge it.   Remember, when a state gets more restrictive they violate a patient’s rights; if we let that happen, everybody loses.

Did you already know about this ruling? Is this the first time you heard about it?  If this is the first time, then you need to be working with someone who’s on top of Medicaid Planning developments.  Our team can help you with all of your Medicaid Planning cases. Our team has a comprehensive support for attorneys, financial advisors, geriatric care managers, and CPAs to help them with their Medicaid planning cases.  We offer support for case design strategies, mentoring on Medicaid eligibility issues, assistance with Medicaid Compliant Annuity suitability, and help with marketing your services.

We go beyond just Medicaid Compliant Annuities and provide a whole range of assistance with Medicaid Planning cases.  If you come across a case where you want to where a comprehensive approach can help your client with a crisis or to plan ahead, we can show you the right way to make that happen.

Whether you’re a young lawyer looking to expand your practice skills or a financial advisor wanting to help your existing clients cope with difficult times without being financially ruined, you could benefit from my clear and concise Medicaid planning course.  It’s designed to help even the novice of advisors grasp the difficult Medicaid planning concepts.  If you don’t know how Medicaid issues interact with the advice you’re already giving, you need to learn this subject.

The huge amount of Baby Boomers in retirement is creating new opportunities in the Medicaid planning field.
If you want a full copy of the court opinion please fill click here.